Yesterday the news broke that the O had closed, the latest victim in the local food world of our ongoing global COVID-19 disaster. This news was not entirely surprising. I think they had been trying to sell the place for a while now. Still, this one is tough.

I first went to the O with my dorm RA when I was a freshman at CMU. It was a late fall afternoon. I had maybe skipped lunch, I don’t remember. My companion said “I’ll go get us some fries” while I stared at the menu boards above the counter in the front of the store. He disappeared to the back of the store where the fry station is.

I figured I could get a sandwich, or a hot dog or something to go along with the fries. I don’t really remember the food I ordered that day because when the RA came back he was holding a tray containing a small mountain of just-cooked fries sitting mostly on top and to the side of the tiny cardboard boat that was completely failing to contain them. Also on the tray were a couple of cups of ketchup and some melted Cheez Whiz. 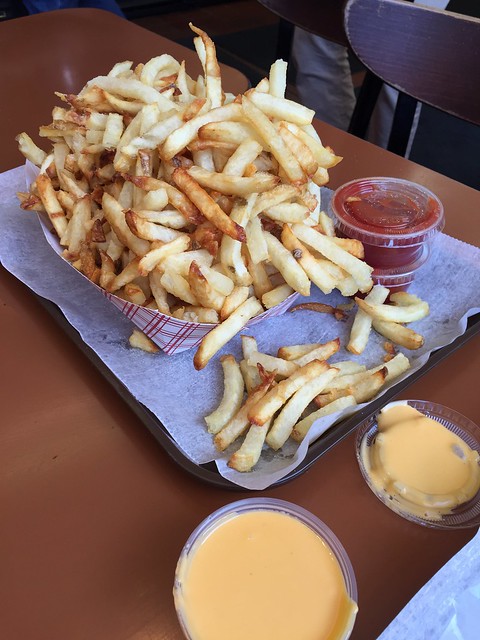 When you ordered fries at the O they told you that you could pick between “small”, “medium”, and “large” but really all they did is cook a whole basket of fries and then upend it on to a tray. The only difference in the orders was the size of the boat that sat under the fries and was not able to actually hold the pile within its bounds.

While the O was most famous for its stupidly large fries, the actual magic of the place was the hot dogs. The O was always my favorite hot dog place in the world. They pulled off the miracle of having a chili-cheese-onion dog that was better than just a plain dog with mustard. As I got older I stopped getting the cheese, but the dog remained as good as ever: 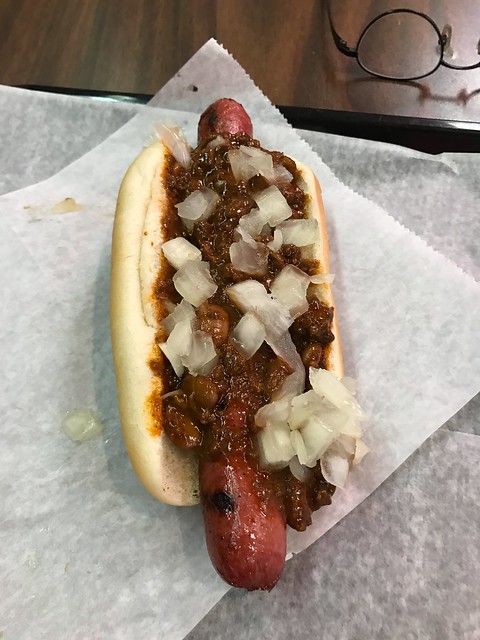 The hot dogs at the O were so good that they even got a special shout out in this NYT survey article about regional hot dog styles:

Finally, no hot-dog roundup would be complete without Essie’s Original Hot Dog Shop in Pittsburgh. While the Steel City’s dogs have no regional quirks, the Original’s griddle-grilled beauties have one thing going for them: flavor. The franks’ tight skins snap as you bite into them, resulting in an explosion of beefy goodness. This is not just a great hot dog; this is a great piece of meat. And happily, although I do not get to Pittsburgh as often as I would like, my standard order at the Original is one I have had lots of practice delivering elsewhere: ‘’Gimme two, with mustard.’’

They get their own column-inch of copy after the main body, set aside from all the other places in the list. Surely a place of honor for the best hot dog place in the world.

Having gotten older, I hadn’t been getting back to the O as much as I used to. It was once or twice a year instead of three or four times a month. Still, it’s sad to think that the chili-onion dog will now join the ranks of a few other local dishes that I can only remember, but never be able to duplicate (see also: General Tso’s Chicken, Zaw’s). I wonder if anyone knows where they bought those perfect hot dogs.

To close, here is my favorite O story, which I swear to god is true.

One afternoon I’m standing at the hot dog counter looking at the flat top. The way the place worked was that there would always be about a dozen or so regular dogs on one side of the grill, and then another five or ten of the larger all beef dogs on the other side. These sausages would sit there getting slowly more and more charred over the hours that they sat there. That’s why the dogs were so good.

Anyway, while I’m pondering whether to get a regular or a beef dog, the dude in front of me gets up to order. He carefully points at one of the darkest, blackest, and most charred beef dogs sitting on the grill.

“Can you take that one and then put it in the deep fryer for a minute or two?”.

And that’s what happened. In the more than 30 years since then I’ve never had the courage to try that. What a shame.