I’ve had my Astro-Physics Mach1GTO equatorial mount for about two months now. The mount has continued to perform better than I could have expected, and I expected a lot. So while it may seem like I have already gushed uncontrollably about it I have just a few more things to say before I just go back to happily using the thing.

I have my setup routine pretty much down. Even though it takes more trips, it’s actually faster than setting up the CG-5 for use with the camera. For visual use it would only be a bit slower. Here is what I do:

Here is what I like about this setup routine:

In the last six weeks I’ve continued to make progress on my projects to make rudimentary video images of all the Messier and Herschel 400 objects. This has gone very well, and I’ve added images of a few dozen new objects to my little collection. Two nights of this work stand out. They might be the same night, but since I do not keep good notes, I have forgotten. On April 18th I captured what was for me a record number of images in a relatively short amount of time. You can see all 29 of them here. Being able to work that fast with the mount and the camera brings up the intriguing possibility of doing an entire Messier Marathon with the camera. But I’m not really interested in that. Anyway, the consistency of the mount allows you do work this way. Once aligned and calibrated the mount just never seems to go “off”. Object after object can hit the small chip of the video camera.

In addition, the mount seems impervious to wind. Wind is the enemy of stability and good tracking, yet one of the best nights I had in the last six weeks was on a night where the gusts were up to 20-25mph in my back yard. Remarkable.

The meridian is a something that hangs over every German equatorial mount. In this design the telescope sits on top of the declination axis and is counterweighted on the other side. Here is a poor schematic: 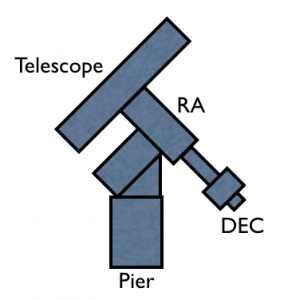 In this design the telescope and the counterweights are always on opposite sides of the pier. When the mount is properly aligned, the RA axis will point straight north, which means the pier will be right on top of an imaginary line that runs North/South right down the middle of the sky which we call the meridian. Another bad picture: 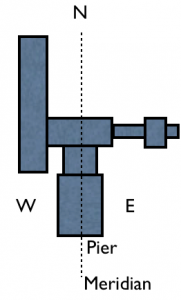 The issue with German mounts is that as you track closer to the meridian you can end up in one of two bad situations:

So avoid these things, the controller forces you to follow some rules. The main rule is that if the scope is pointing East its body should be on the West side of the mount and vice versa. This keeps things from hitting the pier and keeps the weights below the scope. 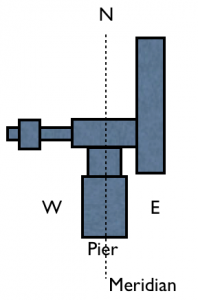 This is a rather drastic and potentially destructive move. Things in your telescope can get out of alignment. You can catch wires on knobs. And, it can throw off your pointing. So, users of German mounts tend to try and avoid flipping at all costs. But, this is annoying since the exact time when you want to look at most objects is when they cross the meridian, because that’s when they are highest.

The Mach1 mount does a few things to make this better. First, the geometry of the mount allows it to track far past the meridian if you want it to. So you can pick up an object on the East side and follow it across its highest position in the sky without needing to flip anything around. Second, the build quality of the mount assures that when you do flip over, all you need to do to restore good pointing is to calibrate with the position of one bright star on the new side. I ended up always needing to do this with the Celestron mount anyway, even with all the fancy alignment software.

Finally, the control software in the mount allows you to shift where the mount thinks the meridian is, and thus delay or force flips when you want to. So, if you want to pick up an object that is 30min East of the meridian and track it until it is low in the West without flipping, you can tell the mount that the meridian is actually one hour further East than it really is. It will then dutifully flip the scope over as if the object is already in the West and then track it for hours without flipping. Just make sure nothing hits the tripod when you start this maneuver. If you are really a mount dork, you can read more about this here or in the AP documentation at their web site.

Astro-Physics even has a clever scheme that uses flips to make sure your polar axis is aligned. This is the basis of the “quick drift” alignment scheme I mentioned before. Here is how it works. First, set up a finder scope on your main telescope that has a crosshair that you can rotate so that one direction corresponds to East/West and the other to North/South. Orion makes a good one that can do this.

Now, pick a star near the meridian and near zenith and have the mount point your finder scope at it. Center the star and hit “recalibrate”. Now shift the meridian either East or West by one hour depending on which side of the meridian you are on to make the mount flip over. If you are well aligned, the star will still be centered in the finder. Any shift East/West is the finder scope not being quite aligned with the mount. Any shift North/South is the mount not being quite aligned in altitude. Use the altitude adjustment to get rid of half the North/South error. Use the adjustment on your finder scope to get rid of half of the East/West error. Use the keypad to center the star the rest of the way. Flip the mount again. Iterate this process until the star stays centered.

Now pick a second star that is at also near the meridian and at least 30 degrees away of the first star. Point the telescope there. If you are polar aligned, the star will again be centered in your finder. Any shift is a result of azimuth error, so with the azimuth adjuster to remove it. Now point back at the zenith star. If it is off center, center it with the keypad, hit recalibrate, and slew back to the second star. Adjust the azimuth again. Repeat this until the star stays centered as you slew back and forth. You are done.

There are a few things to like about this scheme:

Finally, here are some small things that make the mount a pleasure to use.

There isn’t too much more to say. If you are in the market for a really really good telescope mount and you have the funds, I can’t imagine doing better than the Astro-Physics product. It is a well-built no nonsense straightforward piece of equipment that just works and is gloriously free of useless bells and whistles. It’s a reminder that it’s still possible to achieve great things by building in small numbers and paying careful attention to detail.