I have this long standing problem with the iTunes/iTunes Store/Apple Music catalog system. I can summarize it in one screen shot.

Open up Apple Music on your Mac or iOS device, it does not matter, and in the search field try and search for “Martinů viola”. Martinů was an early 20th century Czech composer of modern classical music that I particularly enjoy. In particular he wrote a lot of interesting music for viola. Anyway, here are the results you will get: 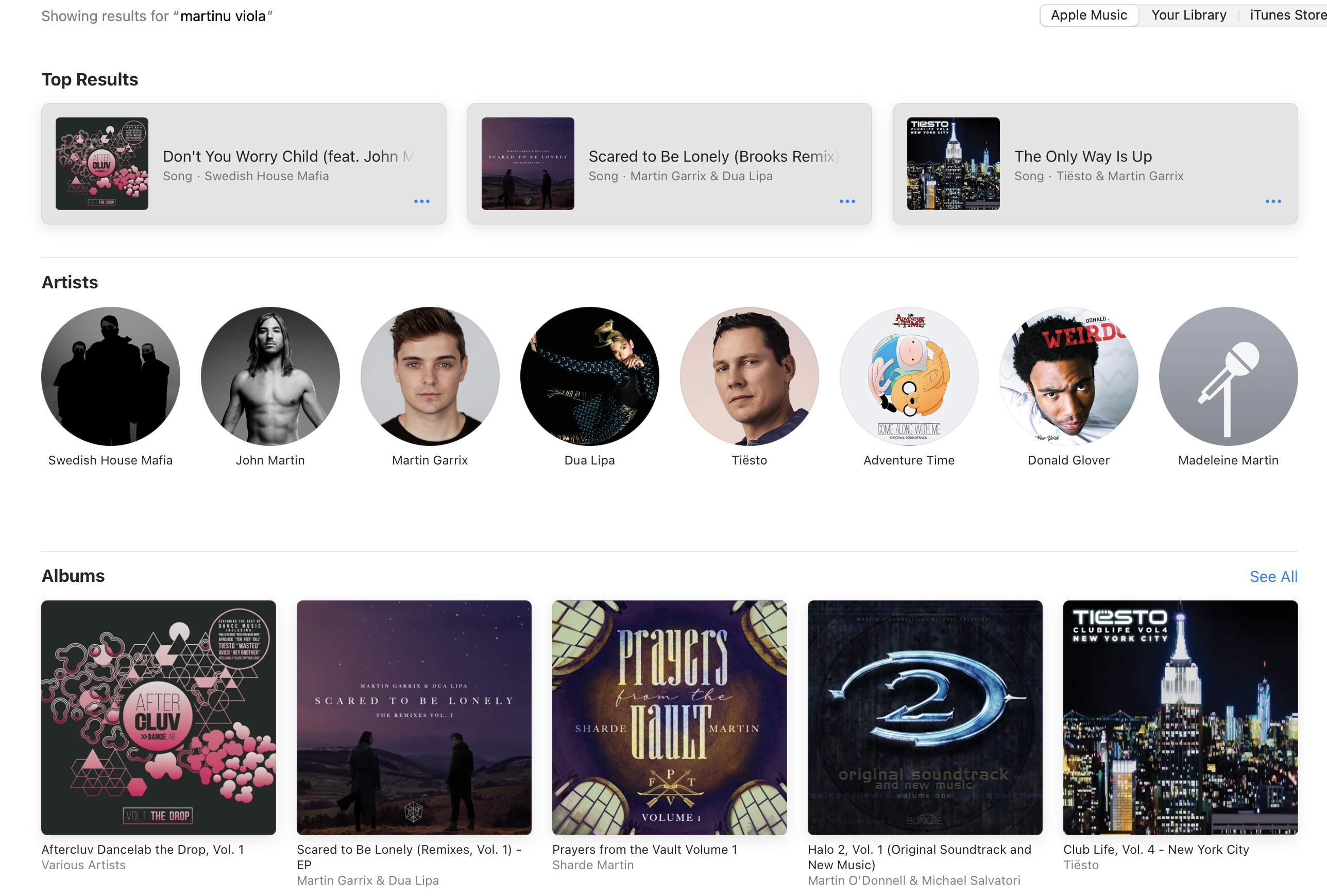 Anyone who knows me has heard me complain about this behavior. My emotional state about it swings from amusement, to detached fatalism, and occasionally to unhinged anger.

But, I have a guess about why it happens.

The thing is, the iTunes (and thus Apple Music) catalog model is built on songs. So the search engine is, naturally, also oriented towards finding songs. So if the data you want is not in the song, and in particular the song title or the main artist, iTunes will not find it.

But, the classical music albums (and to some extent jazz, as well) defeat this assumption by not putting enough useful metadata in the songs. The titles do not contain the composer. The main artist is usually the performer, and not the composer. The composer is shuttled off to its own field of the song record, which I assume is either not indexed at all, or not weighted heavily when evaluating the relevance of the search results. Here is a modest example: 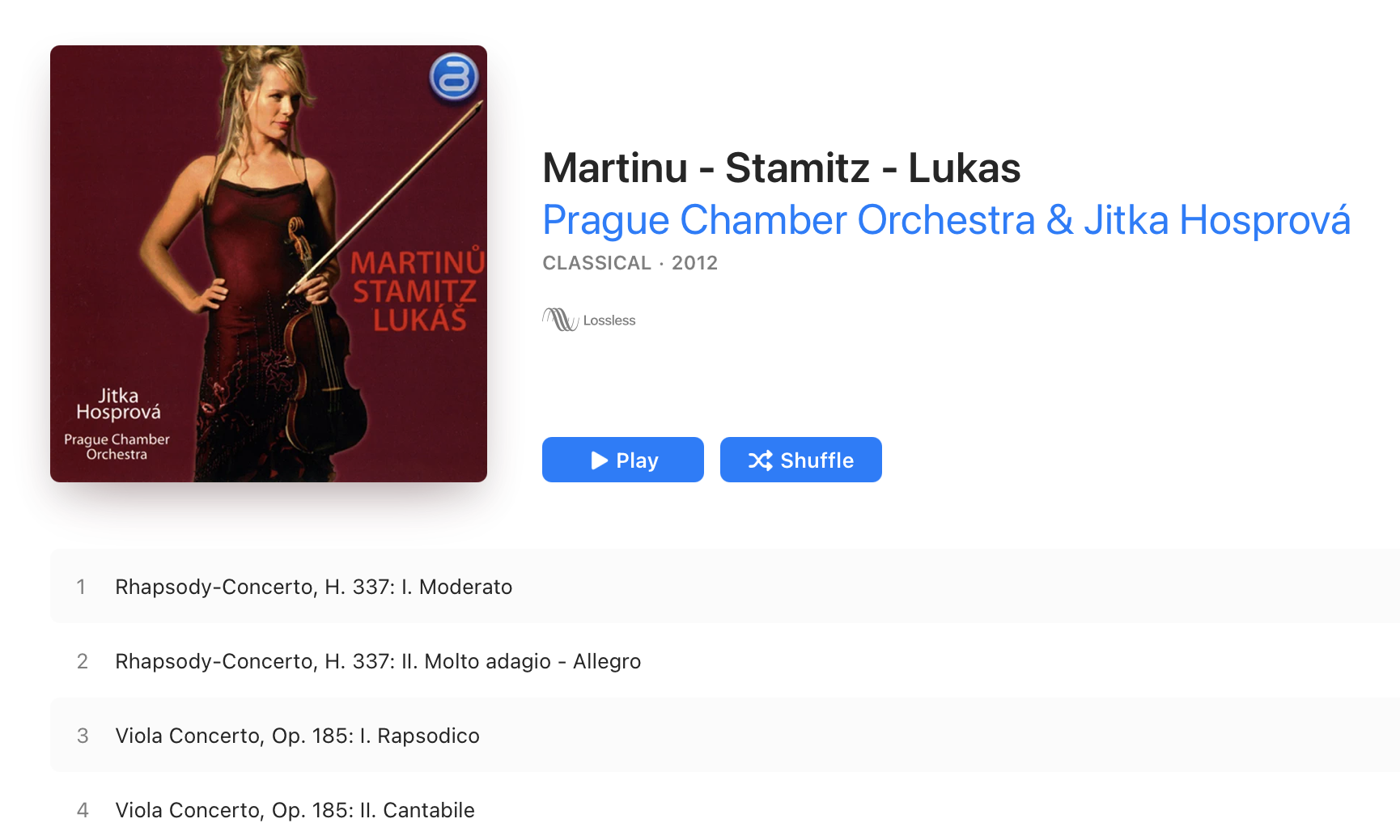 Here Martinů appears in the album title and in the composer fields, but never in the places that are important: song titles and the main artist field. The result is that when I search for “Martinů” in the general Apple Music catalog, Apple Music does not find high relevancy hits for the name “Martinů” anywhere, but it does find good hits for various “corrections” of the spelling of the name. So it thinks I am confused about the name and it shows me that stuff instead. The only way to find this record is to search on the performer’s name. But that assumes that I already knew that I wanted this specific performance, and is thus useless if I want to see all of the available performances of some particular thing.

The fix for this would be to either fix the search engine (unlikely) or fix the data (also unlikely). In particular, if we rewrote all of the Apple Music meta-data to follow this rule from my list of iTunes Rules, then things would be better:

The second rule is: the iTunes data model is fairly simple, so aggressively de-normalize the data. This is especially true for Classical music where the single artist single song model really breaks down. If you are not careful, you’ll go and browse albums or songs on the iPod and see 50,000 titles called “String Quartet XYZ in B Major” and so on. This is useless. The solution is to put the key artist or composer in every field of the database so they will show up in all major views in both iTunes and on the iPod. Of course, you have to do some work to be careful and keep your de-normalized formats as uniform as possible. Life is hard.

Basically, we should spam all of the database fields with the composer name … but especially the song titles and main artist fields. Those are the only bits that the search engine really seems to care about (which kinda makes sense), so we should tune the meta-data to take advantage of this.

Then maybe people would start complaining that they get some Martinů viola concerto album when they were searching for their favorite Martina Mcbride record. Or the Halo 2 soundtrack.