So You're In a Global Pandemic 2

Hey, so. It’s three months later in this strange time that we call 2020, aka the after times, aka the endless sort-of quarantine and endless kind-of almost all-out battle against the global plague.

In the almost Northeast part of the U.S. where I live the only indication of the passage of time is that we have had to switch from gym shorts back to sweat pants, school started up with only half the kids in the building at once if you were brave, or dumb, enough to send your kid there, and somehow people are playing various kinds of professional sports on TV, which is weird.

In some fantasy parallel universe we would have both national leadership and nationwide local leadership and support on a way to navigate this slow motion disaster with sympathy, empathy and a respect for intellectual and scientific discourse. But the truth is that the opportunity for that was lost in the 1990s … so instead here are some short thoughts on the dumb ways that I spent time and money since our last episode.

A Sonnet a Day

Sir Patrick Stewart hit sonnet 142 a week ago … and has apparently taken a break since then.

The small telescope continues to please. Here is the Veil Nebula, a giant supernova remnant that is still expanding fast enough for the motion to be noticeable from Earth: 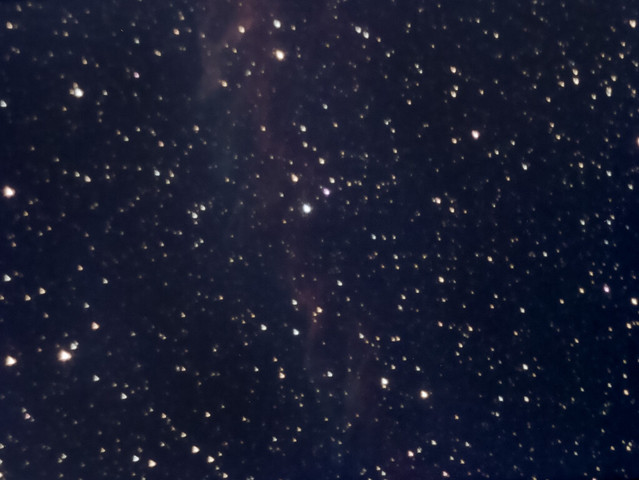 I’ve never been in a place dark enough to try and see this with my eyeballs in a traditional telescope. But it looked pretty cool on my TV last night with the little telescope sitting out in the yard under the Pittsburgh Light Dome. Oh about that.

My one small complaint about this telescope has been that its wifi range is pathetic. If I stand five feet away from it behind a closed glass door between me and the tripod I lose the signal completely. Needless to say I can’t make my phone or iPad talk to it from inside the house. So, I went on Amazon and bought a cheap wireless network extender and plugged it in outside on the patio. Now I can watch what the telescope sees from my couch and even project it on my TV.

Even though consumer wireless networks have been around for almost 30 years the idea of making it convenient to control a telescope from the warmth of your own home has been consistently swimming against a huge current of indifference to the idea of ease of use in the consumer astronomy industry. I call this indifference the “Tens of Dollars” mindset.

It goes something like this: someone makes a new product which integrates a lot of different systems into a single device or workflow that is a lot easier to use, but perhaps has some tradeoffs (i.e. the eVscope). In the hobby forums the general reaction is either:

Which in both cases really means: “How dare someone make a system that allows noobs who have not learned how to do real astronomy have an easier time than me!?”

This dynamic has played out over and over again in amateur astronomy. When computerized mounts showed up that could automatically point the tube at objects in the sky a majority of users poo-pooed the idea. “Why don’t they just learn to star hop like I did?”.

When easier to use video and CCD cameras started to show up ten years ago they were shuffled off into the “electronically assisted astronomy” ghetto, so as not to interfere with “real” visual observation or “real” CCD imaging, both of which take a lot of time and know how to learn.

And now as we finally move into a world where you can buy integrated telescope control solutions without needing to laboriously build a software stack by hand on your own laptop, the reaction is the same. The eVscope is on the low end of this idea (including the telescope and the mount with the control computer runs up the price). Tiny computers for controlling high end mounts are on the high end of this. Even smaller pre-packaged Raspberry Pi type devices are in the middle somewhere. The reaction in the community has been much the same: “Boy I could take a lot of time to build something much worse than that for a bit less money… definitely not worth it”.

Well I am here to say that it is worth it. Running the telescope from my house and putting the pictures up on my TV, without having to do the moral equivalent of building my own gaming PC to do it is worth a lot.

There is this new album out that is a recording of Thelonious Monk playing in the Palo Alto high school in 1968. It’s fantastic you should go buy it.

At the turn of the previous decade, I think, Japanese cooking knives become a short-lived nerd craze. I pondered getting a weird single bevel fish knive, or a tiny little veggie cleaver, or a fancy Chinese style cleaver. Instead I bought a medium-expensive western-style chef’s knife made out of Japanese metal. I used it for a while until the razor sharp sheen came off of it, felt bad about not being able to sharpen it myself, felt worse about having it sharpened once or twice by a local outfit on a commercial knife grinding machine … and then finally put it in a drawer where I eventually lost it.

Around the time I put that knife away I was browsing a local restaurant supply store and noticed that they had ludicrously cheap 8 inch chef’s knives for restaurant kitchens. I thought to myself, “how bad could it be” and bought one for $20. This knife, it turns out, was just as good as the two fancy knives I had used before it. Now I had a plan. Whenever I needed a sharp knife (very 4 or 5 years) I would just get one of these and not worry about all the sharpening nerds.

I was happy with this plan for a good ten years. Until this year when I felt like I should learn something new while working at home. Taking advantage of all the new youtube literature about hand sharpening I had soon bought 3 different kinds of tools for the purpose:

So, all in all I spent about six to seven times what I like to pay for a new knife on widgets for making knives sharper. Good times.

As I said, there are dozens of youtube videos about hand sharpening at all levels of nerd angst. I think the two best that I’ve seen are this straightforward tutorial by Helen Rennie or the head mounted POV video from Kenji if you can watch it without getting sick.

No talk of cheap knives can end without talking about Chinese cleavers. For the longest time I had one that I kept just for smashing garlic. But I never really used it for knife things, and I felt guilty for abandoning my cultural heritage. The lack of a good cleaver was the gaping hole in my knife drawer.

So obviously since I can sharpen them now I should fix this. These days “cheap” Chinese cleavers appear to come in more forms than “semi-custom” carbon fiber road bikes. After trying a few different ones out, here is my hint: buy the cheapest one. Which is the cheapest? You can’t get much cheaper than this stainless steel “Winco” knife. It has everything you want: heavy enough to smash garlic and ginger with one swing, not so heavy that you can’t easily slice through soft tomatoes, nice wood handle, and barely more than $10!

The current darlings among the Chinese brands are CCK and Shi Ba Zi but their stuff costs between three and six times as much money as the Winco. Still, I had to try one of the CCK knives and it is just as advertised. Light (a bit too light for whacking garlic), sharp, and nice to use. But it’s expensive, the blade is too straight so you can’t rock it back and forth for lazy mincing, and I somehow already chipped it. Oh well.

I also bought the Mercer cleaver. Mercer makes the cheap restaurant chef’s knives I use, and this cleaver is the same kind of stamped blade and rubber handle deal. The knife is fine, but also a bit too light for garlic whacking.

Overall the Winco is my favorite. Just the right weight and shape.

Finally, the classic American Chinese cleaver is the one from Dexter. I’ll get another one eventually, just to make sure it’s the same knife (basically) as the Winco. You need two to mince meat anyway, so this redundant purchase will do no harm.