Consider the following photograph of a regular terrestrial scene (as they say in the astro-photo biz): The following histogram gives you an idea of the distribution of different brightness levels in the above picture. To read the graph, you interpret values on the left as dark pixels and values to the right as bright pixels. Then the height of the plot is the number of pixels in the picture with that particular range of values in it.

Most photographs have a histogram that looks something like the one in this example. You have a small number of pixels that are super dark or super bright and you have a lot of pixels with all the values in between. This means that you picture is not clipped off and all the detail is visible.

Astrophotographs are not like this. Here is a typical frame out of a CCD camera: 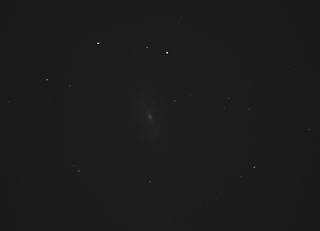 This is a 3 minute exposure of a pretty bright galaxy called NGC2903. If you stare at the frame a bit you can sort of see the shape of the galaxy in there, but it’s not very interesting to look at.

Here is the histogram: >

What this histogram says is “that picture is really dim.”

The goal in processing this image is to take all the bits that represent “signal” (that is, stuff you want to look at) and make them bright. The main problem is that there are all kinds of bits that we don’t want to see (“noise”) that will become visible when we make all the dim things bright.

To give you an idea of what I’m talking about, in the following frame what I’ve done is to push the levels of the picture to increase the brightness and contrast: The result is to take what used to be in that tiny little sliver of a histogram and expand it all out to cover more of the range we want, like this:

Of course, this picture is not that nice to look at.

There are various problems:

If I had to sum up astronomical image processing in one sentence it would be: “the art of making the signal bright, in a pleasing way, while hiding the noise without being obvious about it.” That is, we want to use as many tricks as possible to make the galaxy bright and pretty while avoiding the trap of also showing you all of the problems in the image.

In my previous post I lamented that these and other issues were almost impossible to fix with the video camera. With a CCD still camera it’s still hard, but it’s much more doable.

There are several tools available to the CCD user to remove background noise from an image while retaining detail. These fall into three general strategies:

The second item takes more explanation. CCD “calibration” refers to post-processing your images to remove noise that is generated by either the CCD hardware itself or your optics. Recall from before that the main issues here are dark current and read noise.

Dark current adds noise to a picture by causing the CCD wells to register “signal” that did not come from light hitting the sensor. Luckily, there is an easy way to compensate. Say you are taking 3min exposures of your object. Then what you do is take a frame with the sensor covered up that is exactly 3min long with the CCD at the same temperature. On average this “dark frame” will contain just the noise generated by the dark current while you were shooting your 3min frame. So, you just subtract the dark frame from the original image and you are done. Right?

Actually, it’s not quite that simple. CCD images also contain a lot of random noise (read noise, noise in the dark current, etc) that is different for every frame. So if you just took a single dark frame and subtracted it you would be adding this random noise to your picture, which isn’t great. The solution is to shoot many dark frames and average them together. This smooths out the random noise and leaves a more consistent noise profile behind.

In addition to dark frames, one will also collect “bias” frames, which characterize the minimum signal level, or offset in each frame that you shoot with the camera. A bias frame is basically a zero length dark. Again, you take a couple of dozen of these and average them together to minimize read noise and such. If you take very short flat frames (see below) you can use bias frames to effectively do “dark subtraction” on them, since the dark current will not be significant. You can also bias-subtract your darks which allows you to scale the darks to different exposure times. I personally have not tried to do this.

Darks and bias frames let you minimize the noise introduced into your pictures by the CCD itself. We take many such frames and average them together to smooth out the parts of the noise that we can’t capture directly. The read noise is a good example of this sort of noise. Read noise will be in every shot you take, you can’t get rid of it because you can’t capture it. Even doing dark subtraction just adds the read noise that you couldn’t get rid of in the dark frame into your lights. This turns out to be why the CCD people take so many exposures (72 hours on the Horsehead nebula!!). The more you take the more you can minimize the bad parts of the noise, leaving your signal behind.

What’s left to deal with are defects generated by the telescope itself. In our example these are easy to see:

There are various techniques for automatically removing these problems using “flats”. The idea is that you point your telescope and camera at a perfectly uniform light source and take an exposure that exactly hits a mid-tone on the sensor. Then you shoot dark frames at the same exposure (“dark flats”, or “flat darks?”). Then you divide the resulting data out of your exposure frames.

Personally, I take a different approach to this. First,I am too lazy to shoot flats. Second, since I’m shooting from my yard, I have a lot of gradients caused by light pollution, so I need software tools to deal with these. Such tools will generally also deal with gradients caused by uneven illumination. So I just do that. There is a piece of magic software called Pixinsight that does a very good job modelling and removing gradients and other background noise. I’ve gotten by just using a software solution for now. It has generally worked OK. But I may break down and actually shoot flats at some point.

As for dust … I’ve had reasonable success just cloning it out in Photoshop. I don’t have that many dust shadows. The bigger ones are harder to remove, and if I had more of them I’d probably learn to shoot flats.

So, here is the workflow for your basic black and white CCD image.

Now load all this up into your favorite imaging software (Nebulosity, Maxim) and tell it to calibrate your frames. When you are done, you’ll have nice clean single frames. Now use the same software to register and “stack” these frames. The result will be a single combined image that you can then stretch out to bring up the detail. The amount of noise you have left will depend entirely on how long your exposures were. This, in the end, will determine how much detail you can pull out.

Here’s the final version of the example object that we started with. The blacks here are actually clipped because I was not that good at this yet. Here is a better image where I didn’t have to clip the blacks to hide the noise: These image are all limited by a couple of things:

Next time we’ll see how one can progress past these issues mostly by spending more money.