At the end of this tutorial on beef stir fry I suggest a variation of the dish involving the beef, tomatoes, scallion and garlic. Since we are at the height of the season for good tomatoes, today I have a refinement of that variation to report on here.

Recall that what you do to stir fry beef is mix the following in a bowl:

Let this sit for as long as you have time for. Ideally an hour or more. Make rice in your rice cooker while it marinates.

When the rice is about ready, get this other stuff ready:

Heat up a sauce pan that can fit the tomatoes then add some oil. Throw in the tomatoes, garlic and the white part of the scallion. Stir this around and cook it down until the tomatoes start to fall apart but are still chunky. Then turn the heat down to a simmer.

Now add a tablespoon or two of corn starch to the beef mixture. Stir fry the beef in different pan like it says in the other page.

When the beef is almost ready (you’ll know) toss in the green part of the scallion. Then mix the meat into the tomatoes. If you want to get fancy deglaze the beef pan with some more wine and add that to the tomato pan too. Mix it all up so the corn starch thickens things a bit.

Serve this on white rice, preferably short grain and a little sticky. If you must indulge your inner voices for healthy eating and make rice (or some other fool grain) that is not white, I can’t stop you but just don’t tell me. It makes me sad to even think about it.

When you are done it should look like this: 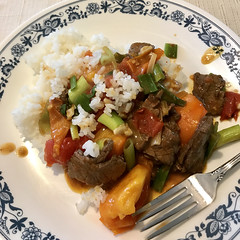