If I had an eye for design and had been keeping better track I’d have realized I was closer to 20 posts on this web site this year than most recent years and might have tried to get to that number for the symmetry of it all. Instead here is an end of year list of random thoughts that never quite got “on to the page” as it were.

While I mean to concentrate on appreciating the positive I will stay on brand here and lead with the negative. I wasn’t going to say anything about this until Jan. 21, but given everything that’s happened this year and the almost complete abdication of concern for competence, intelligence, standards of decent behavior, hypocrisy, and just basic respect for the truth on the part of our (mostly) Orange-aligned political leaders let me just throw out one more “fuck those guys” for 2020. No one ever deserved it more.

Here’s hoping that all these places and all the others that I forgot or just are not on my personal radar make it out the other end of all this bullshit. Selling food to people at retail has always been one of the harder and least appreciated jobs on Earth … and this last year, and probably the next one were and will be about as hard as it gets.

Also RIP to the O and Dinette, two local treasures that could not be any more different and yet are equally sad to see go. Ka Mei is also on the RIP list and who knows how many others.

A few months into the great darkness my consumer brain was tempted by a stupidly expensive giant toaster oven (the Cuisinart). I think making the toast for BLTs in six passes broke my spirit. So we got one, and it was OK but not perfect. The oven part works great but the front panel UI was only marginally useful.

Then our real oven (whose front panel UI is the worst I have ever used) died. So we bought another different giant toaster oven (the Breville). On this one the front panel is a lot better but still stupid … but the oven part is great. It even made my biscuits puff up like they have not puffed in a couple of years. 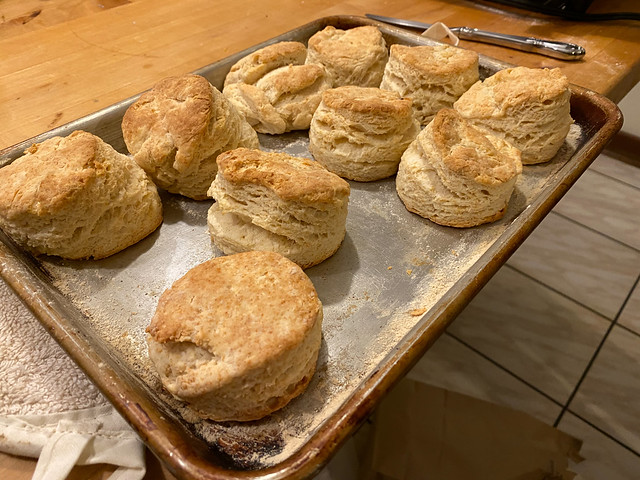 Who knew. Anyway if you have infinite money to spend on a toaster oven go for it. The Breville (The Smart Oven Air) is great. The link informs me that they are redoing their web site so it is sure to be broken soon.

I’ve made this dish a lot this year. Even with all the spice and heat it has become a family favorite. I follow the general outline of the Fuschia Dunlop or the Chinese Cooking Demysitified recipes.

The things you must absolutely have to make this dish well are fresh garlic and ginger, Sichuan peppercorns (花椒) that you toast and grind up, and the Sichuan Chili Bean Paste, i.e. Pixian Doubanjiang (郫县豆瓣酱). You also need some kind of dried and ground up chili pepper. The Chinese chili flakes (辣椒粉) are nice, but you have lot of latitude here. I like soft tofu. Others use hard. I like ground pork, though the traditional recipe is ground beef. Finally, if you use dried shitake mushrooms this is one of the classic dishes that loses nothing without the meat.

Tuning just how much peppercorn and seasoning to use for your taste takes a few tries, especially as the peppers can vary a lot in potency. But nothing in this dish is hard. It’s all touch.

This is a recent podcast were Dave Chang and his friends try to tell you what the best recipe is for various well known dishes. At least that’s the premise. The actual execution is more about why Dave always loses, why Dave (and others) never actually follow the recipe, what recipes are for anyway, and occasionally some meanderings about the status of ethnic food in the American Food Canon. The most recent episode covered Gyoza which are the (mostly inferior) Japanese version of the Chinese jiao zi (饺子). I only became enraged once even though two of the recipes were vegetarian, so this is the status I afford these people.

As a digression … the show spent a lot of time wondering if pot sticker was just a bullshit name for the fried version of jiao zi. The truth is that it’s a pretty good translation of the Mandarin word for the fried dumplings which is 锅贴, or “guo tie”: literally the stuff that sticks to the bottom of the pan (guo) and thus tears off when you try to take it out (“tie” means tear or rip). The much larger mistranslation is calling jiao zi “dumplings” in the first place since in the Western usage dumplings are not filled with anything. All of those filled pastas and related foods get their own names (tortellini, ravioli, cannelloni, pierogi, pelmeni, kreplach, gyoza, mandu, mo-mo, samosa, etc). Only jiao zi get singled out for the bad translation to “dumplings” … mostly because the Mandarin word is hard for non-Chinese people to say.

This is a great injustice because while all these other foods are fine and great, we have to acknowledge that the classic pork, ginger, and cabbage version of the Chinese dish is the unquestioned and unassailable GOAT champion of this genre. The boiled are best. But even the fried are already better than all the others.

Sohla is great. Look her up. Just on the basis of the ma-la hot dog tacos she gets into the Youtube chef hall of fame.

This is a good movie. It’s not perfect. It has that other-worldly Pixar Polish on it. But it does what it sets out to do and in a first for movies in recent memory it treats Jazz well. This is more than can be said for other “Big” movies this winter.

So I made a hyper-mode caster … and … wow. Magic is almost always OP in Souls games. But this is some next level nonsense.

For once a previously unknown and undiscovered bit of tape from a well known Giant is actually worth listening to for reasons other than history. Google for the full story and then enjoy the show.

I’ve had these for a long time, but it’s time to give them some long deserved praise.

These speakers don’t connect to your Internet. You can’t talk to them (so they don’t record everything you say when they are near you). You have to run them in old fashioned stereo pairs. They do not do 16 channel high dynamic range surround sound which is actually a trojan horse for DRM in a cable. They are not part of some other giant All Home Remote Control software platform. All they do is sound better than all the other powered speakers of similar price and size. This is especially true of the smaller models (the A2 and HD3) which measure 6 inches high by 4 inches wide by 5 inches deep. Good people of the Internet I looked all over for any speakers this small that had any kind of chance of sounding this good and did not find any. And as a bonus they come with their own amplifier.

This is Thanksgiving Dinner inside a burrito. There is no more twisted and spectacular expression of misguided fusion cuisine than this dish. But it’s great and you should get two every year.

Finally we end the year on an old guy story about old hardware that only old guys could possibly know about.

A long time ago I gave a nerd lunch time work seminar about old things that I had used in my life that were older than a friend of mine. Most of this centered around the computing environment at Carnegie Mellon in the early 80s.

At the center of this was an old “dumb terminal” called the Concept 100 made by a company called HDS back when what you did to use a real computer was hook up another computer that was programmed to do nothing but let you interact with the actual computer. These secondary computers were called “terminals” (because they terminated at the human, I guess) and as this old brochure shows they were hideously expensive for how little they did. The standard setup was a weird keyboard and a display that could show you anything as long as it was 25 lines of 80 characters of ASCII text.

At CMU they had, of course, customized the terminals with new firmware that made them update this text faster when using sophisticated real time interactive software like emacs. A graduate student named Leonard Zubkoff had done the work and the modified terminals were called clnz, the lnz part being Zubkoff’s username.

I dearly wanted to tell this nerd story in my nerd talk, but I could not find a photo of the object. The best picture I could find was a bad scan on a web site about the history of computing at Columbia University, which looked just like the image in the brochure.

Then a few weeks into the pandemic a local nerd I know who collects old nerd things posts this on his twitter: 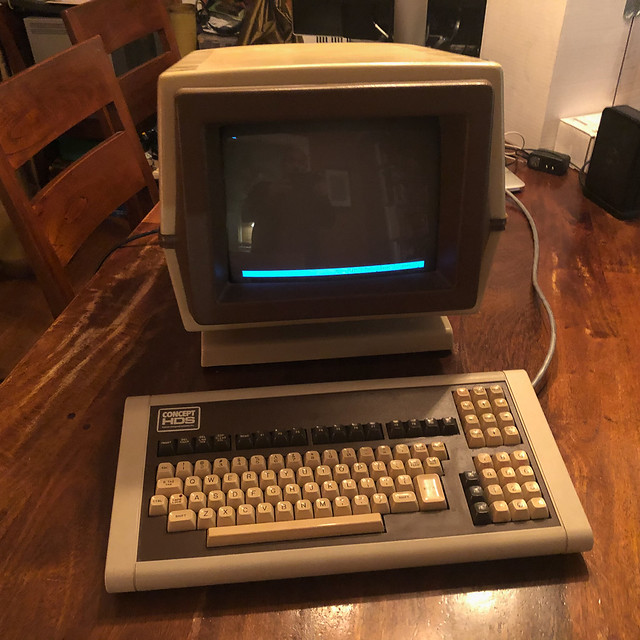 And holy shit I almost fell through my living room wall into my yard. Not only did my friend Dave have a picture of this thing, he actually had a working example. Check out that tiny display, and that weird keyboard. I still have not been able to go see the thing in person, but I am happy that it exists.

Thus I have used my last (approximately) 2020 words of 2020 to give some genuinely deserved appreciation to old favorites along with new and current ones. 2020 will never be a favorite anything for anyone, but we should remember the things that are.