If you are ever in Florence, in Italy, you might find yourself standing in the giant crowd of tourist humanity that will inevitably be standing in front of the Florence Cathedral, also called the Duomo, or the Cattedrale di Santa Maria del Fiore. You know the one. Giant dome, white and blue marble. A church so famous they put it in the Project Gotham video game.

Anyway, you are standing there, and it’s close to noon and you are hungry. In other cities you might have some anxiety about this situation. Where will you go, where there are so many tourists, to get a good bite to eat that

In other places this would be a problem. I have often joked that in Paris the price of a bottle of water follows an inverse square law based on how close you are to the Louvre. By all accounts you should be out of luck and prepared to part with many euro for the simplest snack.

Happily though, you are in Florence. Being in Florence means that all you have to do is walk a few hundred feet to the South of the Duomo: 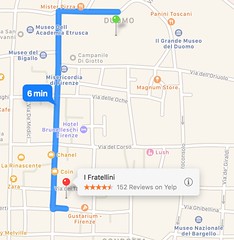 I know about this place because my old buddy Pete from tleaves has been telling me to go there for years. Now because of him you know about it too.

At that spot, you will find a sandwich stand called I Fratellini where for a mere four or five euro (say $5 USD) you can buy the perfect sandwich (and for a bit more a nice glass of red wine) and then happily get on with your day knowing that you could not possibly have made a better food choice. 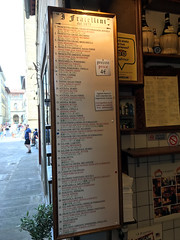 Now, reasonable people can disagree about what the best sandwich on this board is as long as they all agree that it’s #15: Finnochiona and cream cheese and arugula (you can add the greens to any sandwich on the board for an extra euro, I believe). This is especially true if the “cream cheese” that day is actually a thing called burratina, which I assume is some sort of smaller younger ball of burrata, which is the fresh mozzarella filled with an extra creamy cheese inside.

Side Note on Mozzarella in Italy: This is one of those things which if you go over there you will realize is actually a completely different food from the thing people call “mozzarella” in the States. It tastes nothing like it tastes here. Gelato is a more famous example of this. I’m not much of a gelato fan, but it’s clear even to me that the best stuff over there has no analog here.

Back to the sandwich. Being a good foodie, I tried several other sandwiches on the board, while letting my wife get the good one. I think I tried the porchetta, one of the other dried salami, the mortadella … none of them were even close. The only other sandwich that was close was the Lardo (#22). By the time I got there I was spooked and didn’t try anything new the rest of the trip. We have to go back for the anchovies, and the tongue. Sniff.

Here is what makes this sandwich perfect.

In my life I have purchased a lot of sandwiches in a lot of places and almost all of them get one (or all) of those three things wrong. You can go to Subway and get fillings that fell off the Sysco truck and on to the sidewalk a week ago crammed into “fresh baked bread” that is already stale coming out of the oven. Of course, you can’t expect more from Subway since their goal is not a good sandwich, but making enough margin off of each sale to keep their real estate holding company afloat.

But even the places that are trying to do well end up failing in various ways. Typical problems include the size of the sandwich (always too big) or using the wrong bread (always too much). You have the dumb NY Deli-style monstrosities which have evolved to the point where it is apparently required that the sandwich hold 8 to 16oz of meat formed into a mountain like the one in Close Encounters of the Third Kind. Or you have places that claim to sell sandwiches but really just want to sell you their lovingly hand crafted artisanal sandwich rolls. Thus the sandwich is all bread or worse, too much filling crammed into too much bread. Don’t let this happen to you.

It is rare in the U.S. (maybe other places, I don’t know) to run into people who truly understand how to construct and engineer a good sandwich. I have a short list that I can remember, many of which are sandwiches I made myself. I wonder why it’s so hard to pay someone here to be good at making sandwiches.

Anyway, the list of perfect sandwiches I have had in my life:

Making this list turns out to be easy. All I have to do is think about any given sandwich that I have eaten, and then think about the thing I got in Florence for $5. If I am not completely enraged at this point then the sandwich was good enough to put on the list. When I go through this exercise for the replacement level American sandwich I remember that I paid around $12 for too much bread and boring fillings put together by an indifferent teenager in such a way as to fall apart in my hands if I am not super careful. Then the rage builds.

For the record here are some other portable foods that are not sandwiches, but when well made achieve the same sort of perfection as above.

First, if you happen to be standing near I Fratellini and for some reason the board is not speaking to you, you can walk another few hundred feet to Antica Porchetteria Granieri 1916 : 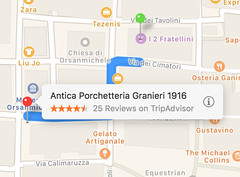 and get a $6 Porchetta sandwich that will change your life. As far as I can tell they cook one whole pig every day or two and cut it up into sandwiches until they run out. The product here is a little too big to eat while walking, but it’s sublime anyway.

We also went to a third sandwich shop called SandwiChic that was very good but also in a different style. More panini than single handed stuffed roll perfection.

And finally, as I was writing this we headed over to the local summer farmer’s market where a new bagel bakery in town, Pigeon Bagels, was selling a bagel sandwich with cream cheese, fresh local tomatoes, lettuce, and anchovy. This, I thought, would not have been completely out of place in Florence. So maybe there is yet hope for the sandwich in the States.

Editorial Note: I realized after I hit publish that there should be one more entry on the list of great sandwiches: a well made milanesa. There used to be a Mexican restaurant in Pittsburgh that did this really well, but I have not had a really good once since then.