Late Night with the Mallincam

If there is one thing that I have learned in my now medium-long lifetime it’s that in Western Pennsylvania you cannot count on clear skies lasting. So when the clouds parted last Friday night at 11:15pm, I had a short quandary. On the one hand, it was 11:15pm and I should be in bed. On the other hand, it might be the last window of clear sky for another month. April to this point had been nothing but gray skies, cold, and rain. After considering this for about 45 seconds, I started to set up the telescope.

As this was my second time out with the new mount and as the first time had gone pretty well (got set up and aligned in about 20 minutes) this time things went less smoothly. To make this work well, you need script and a list. And I forgot a few parts of the script. Here is how you set up.

First, we need short tangent on what we want the mount to do for us when we are done. By convention we keep track of the position of every cataloged astronomical object that we deal with using something called the equatorial coordinate system. This coordinate system is similar to the one we use on the Earth, with the longitude and latitude, except it that it’s projected on the sky. The east/west coordinate, similar to longitude, is called Right Ascension or RA. I don’t know why. RA is measured like time, in hours, minutes, seconds and so on. This turns out to be convenient because you are often interested in the time at which objects are visible or not. If you know the time of year and the RA of the object, you can compute whether or not you should be able to see it.

The North/South coordinate, similar to Latitude is called Declination, or DEC. This coordinate is measured in the familiar degrees, minutes, seconds, and so on.

Our equatorial mount, unsurprisingly, has two axes that go by these same names. The right ascension axis is also called the polar axis of the mount.

Second, we want to give the mount’s computer an accurate picture of what is where in the sky so it can point the telescope automatically. I call this star alignment to distinguish it from polar alignment. When we are done, we should be able to tell the mount to point the telescope anywhere we want in the sky, and it can do some quick calculations to figure out exactly how to run the motors to pull that off. Then we sit back and watch the object come into the field of the eyepiece, or camera. So, here we go.

The mount will then let you repeat this process on a second star. You will notice that by default both of these stars will be chosen from the western part of the sky. After you are done, the hand controller will ask you if you want to add “calibration” stars, all of which will be chosen from the eastern part of the sky. You can add up to four of these stars. Keep adding them until the pointing gets very accurate.

There are two important things to know about this procedure:

First, the east/west breakdown is important for mounts like the CG-5. The CG-5 is what we call a “German Equatorial Mount”, or GEM. The geometry of the GEM is such that you have to be aware of the relative position of the telescope and an imaginary line called the meridian. The meridian is the line that runs North/South and splits the sky in half East/West. If you have set up your mount correctly, the middle of the tripod sits right on top of the meridian, and in a GEM this means that the scope is on one side of this line and the counterweight is on the other. The thing you have to remember is that GEMs have a hard time tracking past the meridian because when you go too far either the scope or the counterweight shaft will run into the mount. Bad news.

To get around this problem GEMs flip the scope around whenever they cross the meridian. You want to be able to do this and maintain pointing accuracy, so the Celestron software does allows you to do extra calibration to make sure this works right.

The second thing to remember about star alignment is not to try to do it when there are thin clouds around. This makes it easy to guess wrong and align on the wrong stars, or stars you cannot see. Then no matter how many stars you align to, the pointing never gets any better. If you notice this happening, the best thing to do is to reboot the mount and start over. I ended up in this situation at about 11:45pm. By then the sky had really cleared, so I buckled down and tried again. I turned the mount off, made sure that I got Polaris into that damned hole, and started again. Ten minutes later I was ready to move on.

By this time your knees and shoulders should be a bit sore, but your mount will be well aligned for both pointing and tracking. I managed to get to this state by about 12:15am. So then I yawned and went in and got my camera.

While the CG-5 mount is bigger, heavier and more complicated than my old 8SE mount, it does have its advantages. First, I have found that the tripod is much more solid, so the telescope does not shake and shimmy when I’m trying to focus. Second, it’s a lot easier to use the camera because I can stick it into the back of the telescope without worrying about it hitting the base of the forks. On the other hand, there are some things you want to be careful about.

If you do not firmly attach your eyepiece to the telescope, you may find that the mount can make it fall out as it turns and twists the telescope at all strange angles. This is bad. You may also find that the various cables that stick our from various ports in the mount and lodge themselves between the motor housings. I’ve had this happen twice now and I’m not sure why, but it does make the mount upset. Try to avoid this.

Luckily, on this night, with the time nearing 12:30am, I had none of these issues and was able to happily go to my first target, the galaxy NGC 2903. There are two things to note here. First, you can see the cool spiral arms of the galaxy. Second, even with about a minute of exposure, the mount is still tracking pretty well. I have found in general that a minute works well. Two minutes is a bit too long. 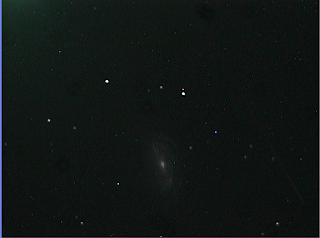 Second target of the night was the “Hockey Stick” galaxy, NGC 4656. This is a pretty dim object, I was happy to get a good view of it. 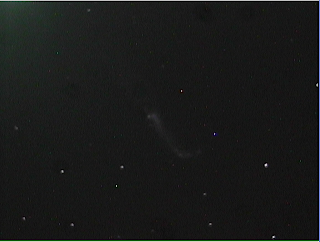 I then cruised through the galaxy clusters in Virgo and Coma Berenices. There was M64, M84, M86, M87, and M91. For two hours, everything I asked for hit right on the camera and the mount tracked with relative smoothness. I was using the camera with a .5x focal reducer, which means that the effective focal length of the telescope was 1000mm instead of 2000mm. This means that the field of view of the camera is roughly 20 by 15 arc minutes, which is pretty darned small. Overall I remain impressed by the ability of a 25 cent embedded processor to accurately point a 15 pound telescope with this level of accuracy. 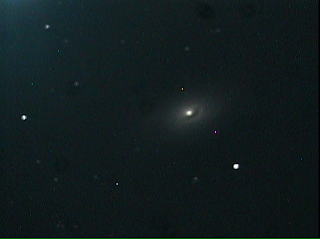 Somewhere around M87 I noticed the pictures looked funny, with ugly bloated stars. I didn’t think about it too hard until I tried to look at M101 and it was all blurry. So, I turned the telescope to the globular cluster M3 and tried my best to refocus. 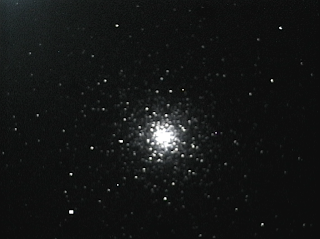 Having gotten closer, I went back to M101 and got the surprise of the night. Most of the objects I had looked at had been small with bright cores but not much in the way of larger scale detail. M101 was different. The arms spread out over the field of view with dim hints of dust lanes and other grand details. 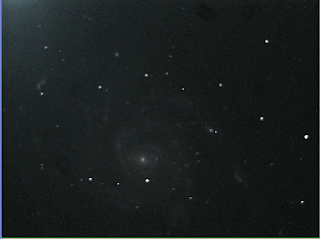 I finally shut down for the night at 2:45, sleepy but pretty happy. I was also hopeful that with a bit more practice I’d be able to tease even more out of these objects sitting above me in the sky. Who would have thought you could see this much with relatively little work in your backyard.